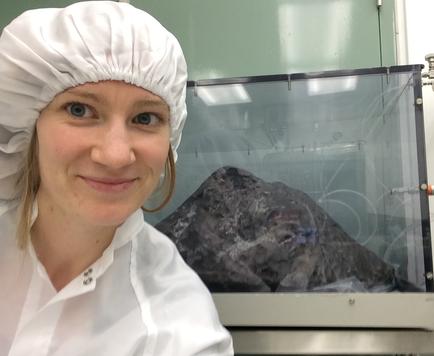 This ~20 kg (~40 lb) ordinary chondrite was found in Antarctica. When it is not busy serving as a 4.5-billion-year-old record of the early Solar System, it enjoys taking selfies with admiring visitors.

Growing up, my father designed spacecraft, so I became interested in the Solar System at a very young age. Following an undergraduate internship at SETI working with the Mars Phoenix lander, I was hooked on planetary science. I received my undergraduate degree in chemistry in 2008, and following a brief stint teaching English in South Korea, I started graduate school at the University of Arizona in 2011. In August, 2016 I graduated with my PhD in Planetary Science. In September, 2016 I started a Postdoctoral Research position at Southwest Research Institute in San Antonio, Texas. I became a Research Scientist  in 2017, and was promoted to In Situ Techniques Group Lead in 2019.

When I am not studying the chemistry of the Solar System, I enjoy doing crossfit, learning classical guitar, playing with my dogs, and exploring the world around me.